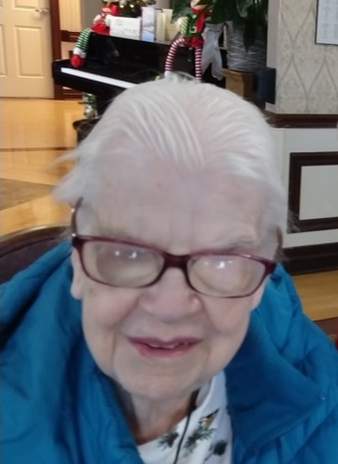 Dorothy L. Pruitt (nee Regedanz) of the Woodcrest Rehabilitation and Nursing Facility in Covington, Kentucky, was born on June 17, 1930 in Celina, Ohio, the youngest child of William and Ona Alice Regedanz (nee Johnson).

Dorothy passed from this life on July 9, 2020.  She was preceded in death by her parents, her husband Donald Pruitt of 41 years, her brothers Clifford, Glenn, Forest, Eugene, and Leon, and her sisters Inez and Bernice.  She is survived by 7 nephews, 3 nieces, and many great nephews and great nieces.

As a child Dorothy contacted meningitis, leaving her blind.  She attended grades 1-12 at the Ohio School for the Blind in Columbus, Ohio.  After graduation she worked in Cleveland, before moving to Cincinnati in 1965, where she worked for the Association for the Blind until 2002.  It was while there that she met and later married Donald Pruitt.  They established a home in Northern Kentucky where they continued to live until their deaths.

Dorothy loved being with people, traveling, bowling, playing Bingo, and listening to Bluegrass music.  She was a faithful member of the Northern Kentucky Church of Christ.

Dorothy was an advocate for the education and employment of the visually impaired.  Donations may be made to the Cincinnati Association for the Blind and Visually Impaired in Dorothy’s name.

THE FAMILY ASKS THAT EVERYONE THAT ATTENDS THE VISITATION AND FUNERAL PLEASE WEAR A MASK AND PRACTICE SOCIAL DISTANCING!!!

To order memorial trees or send flowers to the family in memory of Dorothy Pruitt, please visit our flower store.