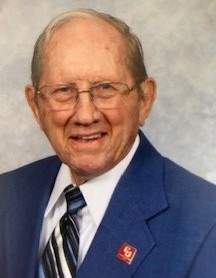 Rev. W. Ken Forman died at home in Campbellsville with his wife Pat Glasscock Forman, and daughter Cathy nearby, early Monday, February 15, 2021.  He was 93, a longtime member of Campbellsville Baptist Church and had served in professional ministry for more than 60 years. He will be interred at the Floral Hills Memorial Gardens in Taylor Mill, Saturday, June 26, 2021.

Born September 26, 1927, in Cincinnati, OH to the late William Arnold Forman and Inez Violet Miller Forman, his family moved to Crescent Springs, KY following the 1937 flood. He graduated from Dixie Heights High School and in 1947 left farm work to become a laborer at the Latonia Refinery of Standard Oil Co.  Calling him “Mr. Versatility,” an article in The Sohioan at the time, said Ken enjoyed work in the yard department of the plant, “where his natural handiness as a fixer could find an outlet”.

In October of 1948, Ken married his childhood sweetheart, Wilma Marie Pack, who preceded him in death May 11, 2007.  As young marrieds, they were active in “The Utopia Club”, a group interested in agriculture and farming as a way of life.  These ideals materialized later in life with his “Peaceful Valley Farm” and sorghum mill.  They had embarked on a life carrying him to Sohio research labs in Cleveland and from there to further education back in Kentucky and more than 60 years of pioneer mission ministry and full-time church and Convention staff work.

Ken remarried in January 2012 and served with his wife Pat, on the board at Homeplace on Green River, a historic 200 acre farm first settled in 1805 and being developed to promote rural American culture and local history and opportunities to experience life on the farm.  In addition, they worked extensively together in local ministry to senior adults.

He is also survived by one brother and one sister: Jack Forman and wife, Sue of Hendersonville, TN; one sister, Carol Clayton and husband, Howard of San Antonio, TX; four brothers and sisters-in-law: Charlie Pack and wife, Mary of Taylor Mill, Albert Pack of Cold Spring, Penny Pack of Port Orange, FL, and Joan Forman of Erlanger, KY. He was preceded in death by two brothers: Donald Forman and Robert Forman.

Feeling the call to full-time or bi-vocational Christian ministry in the early 60’s, Ken moved his family back to Kentucky to attend Campbellsville College, where he paid his way with “Versatility” jobs on the maintenance staff and as pastor of Yuma Baptist Mission where he lead revival meetings, performed the first wedding at the church building, and ordained young preachers.

While pastoring Mt. Roberts Baptist Church, Rev. Forman suffered a catastrophic fall that left him in casts for many months, but he was able to continue to minister in different ways, even performing a wedding at their home in casts.

He attended Southern Baptist Theological Seminary to work toward a master of divinity degree, and then moved his family to west-central Ohio to found a Baptist mission in Celina. Five years later the family returned to Kentucky to allow him to complete his seminary degree while mission pastoring with Shelbyville Baptist Church.  Eventually they moved back to Campbellsville where he served on the staff of Campbellsville Baptist Church as Associate Pastor with J. Chester Badgett.

He took the jobs of painter, builder, teacher, farmer and friend to thousands over the years and always saw “God’s Appointments” where others sometimes might see chance meetings.  His sense of humor, his smile, and unflagging hope characterized all his interactions.

Many other versatility and building mission endeavors sprang from that, including terms as associational Director of Missions in Bracken and Franklin Baptist Associations, a time on the Kentucky Baptist Convention Staff in direct missions, Board of Directors of The Western Recorder state Baptist paper, and terms on the Executive Boards of the Ohio and Kentucky Baptist Conventions.  He and his family enjoyed missions travel around the world, and in Kentucky, his “Last Chance Quartets” at World Mission Conferences always added a special dimension.  In recent years his work at Campbellsville Baptist Church was with the “Young at Heart” seniors group and he continued relationships with Campbellsville University Church Relations committees and other alumni activities.

Several times in recent years he has said he wanted to be sure the last thing people remember about him is the quote from 3 John 4, “No greater joy can I have than this, to hear that my children follow the truth.”

In lieu of flowers, memorial gifts are suggested to:  Lifeline Pilots service, Gideon’s International for Bibles, or the Wilma Forman Memorial Scholarship Fund at Campbellsville University.

To order memorial trees or send flowers to the family in memory of Rev. W. Ken Forman, please visit our flower store.