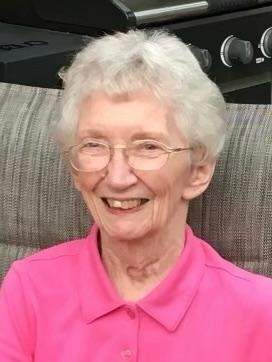 Shirley Ann Ringo, age 86, wife, mother, grandmother and great grandmother, passed after a long illness on Tuesday, January 11, 2022.  She was born in Ft. Niagara at Niagara Falls, New York on July 8, 1935 to the late Willard and Anna Teare.  She was also preceded in death by her brothers Glenn and Willard (Bud).   She is survived by her husband of over 68 years, Donald, sons Scott (Pam), Steve (Becky) and Dan (Martha), grandchildren Ryan (Alisha), Matt (Amy), Chris (Kate), Jessica (Purujit), Alex and Elliott, and great-grandchildren Braylon, Rowan, Evelyn and Graham.  Shirley met Don in Cheboygan, Michigan, married there in 1953 and moved to Northern Kentucky in 1955.  They have been members of the Immanuel United Methodist Church in Lakeside Park since 1960. Shirley was a retired accountant with the State of Kentucky Vocational School in Covington.  She was a skilled seamstress by hobby and assisted the family and most everyone with her sewing skills when needed.  She was a long time board member for the Foster Care program, and later focused her sewing skills to the benefit of foster children at the Covington Protestant Children's Home in Covington.  She spent endless hours designing, sewing and assembling quilts for children at the home.  She always wanted to make sure that each child was warm and had a quilt that was designed to be unique to them and made them feel special. Shirley was an incessant worrier who kept a close and loving watch over her family as it grew.  Every conversation was peppered with questions on how her grandchildren and great-grandchildren were doing.  Her love for her family was enormous.  Her passing and loss will be equally enormous. Services will be held for the family only at Floral Hills Cemetery.

To order memorial trees or send flowers to the family in memory of Shirley Ringo, please visit our flower store.